Linen Lab, which runs at the Banbridge arts venue from 12 October to 9 November 2019,  is part of a large-scale engagement programme called Connected, jointly funded by the Council and the Arts Council of Northern Ireland’s Local Government Challenge Fund. This fund has offered local authorities the opportunity to increase investment in the arts by offering match funding of up to £1.5 million across Northern Ireland. 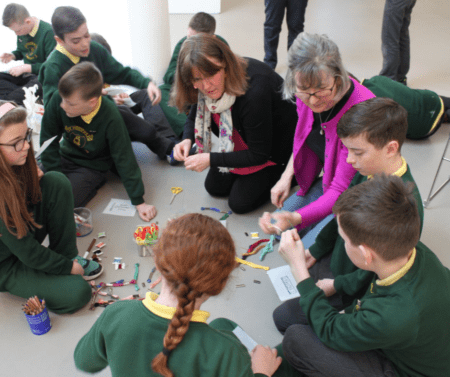 The Linen Lab exhibition documents the creative interactions between the artists and the young participants and presents new work developed during the project. Each artist’s distinct thematic and aesthetic concerns have emerged and developed to produce an exhibition that reveals the versatility of linen as a material, and reminds us of the significance of linen in our families, homes and industrial past. 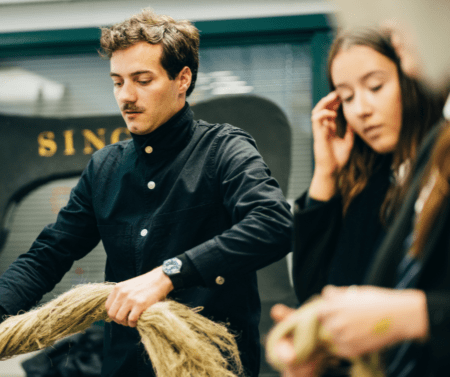 The story of linen and Banbridge are intertwined, as it was once one of the main linen producing towns in Northern Ireland.  At the height of the linen industry, there were some twenty mills associated with different processes in the production of linen dotted along the Bann Valley from Katesbridge to Gilford.  Banbridge is the only town in Ireland that still produces Irish double-damask linen, under the auspices of Thomas Ferguson Irish Linen, which was established in 1854. Today, with a new focus on sustainability and biodegradable materials, linen and flax are once again in the spotlight and are being celebrated through the work of Linen Biennale NI.

The Linen Lab exhibition is a celebration of the many creative collaborations that took place over the course of the project and would not have been possible without the enthusiasm and curiosity of all the young people, artists and teachers who engaged in the project along with the support of the project partners: Thomas Ferguson Irish Linen, Banbridge and McConville’s Flax Mill, Dromore and the Arts Council of Northern Ireland. 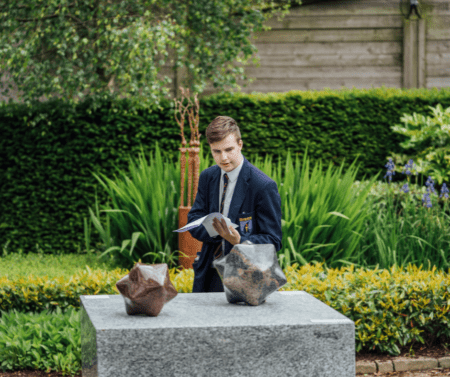 Community Arts Development Officer and project lead, Louise Rice, said ‘Collaboration and engagement is at the heart of the Linen Lab project.  We are all delighted to have had the opportunity to establish such positive working relationships and look forward to developing and widening further connections with the community in the future. The Local Government Challenge Fund has given three of our borough’s cultural venues a fantastic opportunity to develop innovative creative programmes that help sustain collaborative partnerships between artists and local residents’.

Wed 9 Oct
F.E. McWilliam Gallery launch Linen Lab Exhibition
The F.E. McWilliam Gallery & Studio and Armagh City, Banbridge and Craigavon Borough Council are delighted to present Linen Lab, a dynamic new exhibition which is the result of a year-long creative collaboration between eight artists – Rachel Fitzpatrick, Deborah Malcomson, Lyndsey McDougall, Robert Peters, Jill Phillips, Heather Richardson, Archibald Godts and Theresa Bastek of […]
Tue 11 Jun
Linen Lab Artist Rachel Fitzpatrick Exhibits at Collected Presence, Island Arts Centre
Collected Presence was an exhibition held at the Island Arts Centre in Lisburn in April showcasing the work of three Northern Irish designers inspired by linen.  The exhibition celebrated both the possibilities and legacy of linen through the designers very different medium’s; Grainne Maher’s millinery, Elin Johnston’s jewellery and Rachel Fitzpatrick’s lighting. Maher’s collection, Línéadach, […]
Wed 22 May
Lab Night 2: Sculptural Linen
Our May Lab Night focused on sculptural linen, where the teenage participants explored textiles in 3D. The FE McWilliam Gallery was transformed into a balloon-filled laboratory of form, texture and written word, led by artist Rachel Fitzpatrick and writer Heather Richardson.     The night began using the simple ingredients of linen thread, balloons and […]
Tue 14 May
Linen Lab Artist Robert Wins Digital Arts Mentorship Award
One of our talented Linen Lab artists, Robert Peters, was a recent recipient of AmmA’s Digital Art Mentorship Award. This award offered 3 creatives in the borough an opportunity to undertake one to one mentoring with a Digital Arts Specialist across all mediums including Photography, Film Making, Print Making, Textiles, Sculpture, Poetry, Textile Design & […]
Wed 1 May
Linen Lab Visit to Thomas Ferguson Irish Linen factory
Through the eyes of Heather Richardson Mention the word ‘laboratory’ and the image that springs to mind is scientists in white coats and safety glasses, test tubes in hand, Bunsen burners at the ready. The Linen Lab isn’t quite like that, but like all good laboratories it kicked off by conducting a well-planned experiment, assembling […]

JOIN US ON OUR CREATIVE JOURNEY

Get Involved
We use cookies on our website to give you the most relevant experience by remembering your preferences and repeat visits. By clicking “Accept All”, you consent to the use of ALL the cookies. However, you may visit "Cookie Settings" to provide a controlled consent.
Cookie SettingsAccept All
Manage consent

This website uses cookies to improve your experience while you navigate through the website. Out of these, the cookies that are categorized as necessary are stored on your browser as they are essential for the working of basic functionalities of the website. We also use third-party cookies that help us analyze and understand how you use this website. These cookies will be stored in your browser only with your consent. You also have the option to opt-out of these cookies. But opting out of some of these cookies may affect your browsing experience.
Necessary Always Enabled
Necessary cookies are absolutely essential for the website to function properly. These cookies ensure basic functionalities and security features of the website, anonymously.
Functional
Functional cookies help to perform certain functionalities like sharing the content of the website on social media platforms, collect feedbacks, and other third-party features.
Performance
Performance cookies are used to understand and analyze the key performance indexes of the website which helps in delivering a better user experience for the visitors.
Analytics
Analytical cookies are used to understand how visitors interact with the website. These cookies help provide information on metrics the number of visitors, bounce rate, traffic source, etc.
Advertisement
Advertisement cookies are used to provide visitors with relevant ads and marketing campaigns. These cookies track visitors across websites and collect information to provide customized ads.
Others
Other uncategorized cookies are those that are being analyzed and have not been classified into a category as yet.
SAVE & ACCEPT