One of our talented Linen Lab artists, Robert Peters, was a recent recipient of AmmA’s Digital Art Mentorship Award. This award offered 3 creatives in the borough an opportunity to undertake one to one mentoring with a Digital Arts Specialist across all mediums including Photography, Film Making, Print Making, Textiles, Sculpture, Poetry, Textile Design & Fashion, Ceramics.

The aim of the award was to enable artists to transform how their creative work is viewed, altered or enhanced using digital technology. Each artist received 16 hours of one on one mentoring with their digital arts specialist to empower selected participants with new skills, knowledge and confidence alongside showcasing and celebrating their work during exhibition.

Robert Peters was accepted on this innovative programme and teamed with artist Cahal McDonnell to learn how augmented reality could be incorporated into static artworks. The developed work created as part of the mentorship was exhibited in a Pop-Up Exhibition called ‘Merge’ at the Market Place Theatre and Arts Centre from March 12th-15th 2019.

Robert says of this mentor: “Cahal was an excellent mentor who paced the learning to perfection. I incorporated what I learnt about an app called Artivive into several artworks which also encompassed collaborative prints on linen by students from the SRC Lurgan Campus.”

“I created short films from footage of young people working in linen mills and layered these with text about working conditions in the mills and what ages children could start working. I also created a film/text piece on working conditions in iPhone factories in which people spend long hours creating the technology Augmented Reality relies on. What I really liked about the app was that it looped the footage so that the repeated actions of the children played over and over again, suggesting how boring this work must have been.”

In conjunction with this Digital Art Mentorship Award, Robert combined his workshops for the Linen Lab Connected Project to his work on the augmented reality app. Robert explored the working conditions of mill workers in the late 1800’s when linen was a major industry in Ulster and worked with students at Southern Regional College, looking at employment issues within the creative industries.

This project introduced Robert to the app Artivive which provides artists with a platform for their artwork and audiences an app through which to engage with art in a dynamic manner. Here is one piece which incorporates an image made by a student from SRC over which Robert has laid some footage and text. Download the Artivive App to your tablet or phone to see what happens! 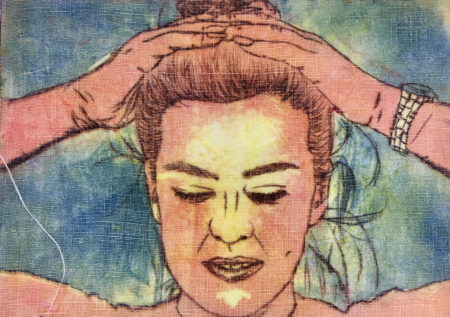 Robert added: “ I really appreciate the assistance of the SRC students”.

Wed 9 Oct
F.E. McWilliam Gallery launch Linen Lab Exhibition
The F.E. McWilliam Gallery & Studio and Armagh City, Banbridge and Craigavon Borough Council are delighted to present Linen Lab, a dynamic new exhibition which is the result of a year-long creative collaboration between eight artists – Rachel Fitzpatrick, Deborah Malcomson, Lyndsey McDougall, Robert Peters, Jill Phillips, Heather Richardson, Archibald Godts and Theresa Bastek of […]
Tue 11 Jun
Linen Lab Artist Rachel Fitzpatrick Exhibits at Collected Presence, Island Arts Centre
Collected Presence was an exhibition held at the Island Arts Centre in Lisburn in April showcasing the work of three Northern Irish designers inspired by linen.  The exhibition celebrated both the possibilities and legacy of linen through the designers very different medium’s; Grainne Maher’s millinery, Elin Johnston’s jewellery and Rachel Fitzpatrick’s lighting. Maher’s collection, Línéadach, […]
Wed 22 May
Lab Night 2: Sculptural Linen
Our May Lab Night focused on sculptural linen, where the teenage participants explored textiles in 3D. The FE McWilliam Gallery was transformed into a balloon-filled laboratory of form, texture and written word, led by artist Rachel Fitzpatrick and writer Heather Richardson.     The night began using the simple ingredients of linen thread, balloons and […]
Tue 14 May
Linen Lab Artist Robert Wins Digital Arts Mentorship Award
One of our talented Linen Lab artists, Robert Peters, was a recent recipient of AmmA’s Digital Art Mentorship Award. This award offered 3 creatives in the borough an opportunity to undertake one to one mentoring with a Digital Arts Specialist across all mediums including Photography, Film Making, Print Making, Textiles, Sculpture, Poetry, Textile Design & […]
Wed 1 May
Linen Lab Visit to Thomas Ferguson Irish Linen factory
Through the eyes of Heather Richardson Mention the word ‘laboratory’ and the image that springs to mind is scientists in white coats and safety glasses, test tubes in hand, Bunsen burners at the ready. The Linen Lab isn’t quite like that, but like all good laboratories it kicked off by conducting a well-planned experiment, assembling […]

JOIN US ON OUR CREATIVE JOURNEY

Get Involved
We use cookies on our website to give you the most relevant experience by remembering your preferences and repeat visits. By clicking “Accept All”, you consent to the use of ALL the cookies. However, you may visit "Cookie Settings" to provide a controlled consent.
Cookie SettingsAccept All
Manage consent

This website uses cookies to improve your experience while you navigate through the website. Out of these, the cookies that are categorized as necessary are stored on your browser as they are essential for the working of basic functionalities of the website. We also use third-party cookies that help us analyze and understand how you use this website. These cookies will be stored in your browser only with your consent. You also have the option to opt-out of these cookies. But opting out of some of these cookies may affect your browsing experience.
Necessary Always Enabled
Necessary cookies are absolutely essential for the website to function properly. These cookies ensure basic functionalities and security features of the website, anonymously.
Functional
Functional cookies help to perform certain functionalities like sharing the content of the website on social media platforms, collect feedbacks, and other third-party features.
Performance
Performance cookies are used to understand and analyze the key performance indexes of the website which helps in delivering a better user experience for the visitors.
Analytics
Analytical cookies are used to understand how visitors interact with the website. These cookies help provide information on metrics the number of visitors, bounce rate, traffic source, etc.
Advertisement
Advertisement cookies are used to provide visitors with relevant ads and marketing campaigns. These cookies track visitors across websites and collect information to provide customized ads.
Others
Other uncategorized cookies are those that are being analyzed and have not been classified into a category as yet.
SAVE & ACCEPT